Floating in a tin can

Welcome to The Spot Writers. This month’s prompt is to write a "never have/had I ever" story.
This week story comes from Chiara. Chiara is currently quarantined in Berlin, Germany, and doing her best to catch up with semi-abandoned writing projects.

Floating in a tin can
by Chiara De Giorgi

Never had I ever thought I’d find myself one day floating in a tin can, like David Bowie’s Major Tom, far above the Moon… and yet, here I am! Of course I really hope I’ll keep in touch with Ground Control and make it back to Earth, but for the time being I just want to enjoy the ride, as they say.

It all began during the 2020 pandemic. People were scared, for a while confusion reigned, but in the end, slowly, things went back to normal – with a couple improvements, if I’m allowed to say so, given that so many didn’t make it.
One big change was that private and independent investors poured money into cryonics research. What’s cryonics, you ask? Cryonics is the preserving of a human body at low-freezing temperatures. Why would one decide to be frozen, you want to know? Well, let’s say you’re suffering from a medical condition that science isn’t able to cure. You have your body frozen and then thawed in the future, when doctors will know what to do. Sweet, don’t you think? I thought so and I had money enough to invest in the project. Moreover, I signed my body off to undergo the procedure in case I became ill with the 2020 virus and would die of it. Which happened.
Admittedly, those were quite the chaotic times, so I don’t blame Cryonics Ltd. for forgetting my body was under ice for about fifty years – when an undergraduate looking for the restroom got lost in the labyrinthine basement and found me.
The world I was resurrected into was quite different from the one I had died in. I couldn’t keep my enthusiasm at bay. Not only was I cured, I also became a celebrity and got rich again in a matter of days.
In the years I had slept away, science and technology had improved hugely. I felt like a toddler in a candy shop, I wanted to know everything, and everybody indulged me.
I could have paid for this space trip, but it was hardly necessary, as any ad company in the world is willing to pay me a ridiculous amount of money just for the honor of putting my face on their products. Space travel is quite common these days, although still a bit expensive. Not everyone can afford it, but I’m happy to report that life conditions have also improved hugely for the majority of the Earth’s population. There are of course reasons for it, one of them being that the Moon is being colonized at the moment, and those who accept dangerous jobs up there are the ones who wouldn’t fare well on Earth.
Anyway. As I was saying, space travel is quite common. What isn’t that common, though, is time travel.
I am the willing participant in a research study on time travel – it seemed the next logical step to take.
So if you get this message, please reply. It will be corroborating evidence that it works. Thanks!

Welcome to The Spot Writers. This month’s prompt is to write a "never have/had I ever" story.

“Never have I ever seen anything like this,” the stranger said as she handed him his change. He stopped with his hand on the handle of the exterior door. “Two-hundred-fifty billion dollars of debt we’ll never repay.” He walked away, leaving the door open, and the shop exposed to the blustery spring weather.
Her husband hurried from the tiny office behind their serving counter. He approached the door and wiped the handle with disinfectant before pulling it closed. The restraining spring hung free, another repair to make before returning to his ovens.
Their first day since the loosening of pandemic-related restrictions that forced them to close their little bakery had been successful. She’d sold almost all their loaves of bread and trays of pastries.
Welcome news because the previous night, as he mixed his tubs of dough, he had no idea how many he should make. Would they see hordes of customers or only a few?
“What was that about?” he asked as he settled onto the stool behind the counter. She’d been there since nine and deserved a rest. He’d mind the store until they closed for the night.
“No idea,” she said as she glanced toward the stairway to their apartment above the shop. “A stranger, so what can I say. Same for everyone who entered. None could resist unburdening little corners of their souls.”
“Everyone’s been alone for far too long. They need someone to talk to.”
“So it seems, and they had strange stories to tell.”
She placed her arms around his shoulders after collecting one of their few remaining loaves. “Been a tough day, we’re out of practice. I’ll make some dinner, and then we can relax.”
“But worth it, don’t you think,” he called as she climbed the stairs. “We belong here. Our regulars will return, and we’ll return to normal.”
He meant what he said. They had a hard life, running a mum and pop bakery in a North America overrun with big-box retailers. They’d raised two daughters who were married with children. One would arrive to help her mother in the morning. The second would be in the kitchen baking cakes to order. And their kids would rush about, causing mayhem, and entertaining the customers without forgetting their mandatory face masks and social distancing. They had everything they desired.

Welcome to The Spot Writers. This month’s prompt is to write a "never have/had I ever" story.
This week’s contribution comes from Cathy MacKenzie. Cathy’s novel, WOLVES DON’T KNOCK, a psychological drama, is available from her locally or on Amazon. MISTER WOLFE, the sequel, coming soon! As well as MY BROTHER, THE WOLF, the last of the series.
https://www.amazon.com/Wolves-Dont-Knock-C-MacKenzie/dp/1927529387/

Our ‘New Normal’
by Cathy MacKenzie

Never had I ever
Expected to break my wrist—
Or any bone—
Is this the beginning of the end?

Perhaps it was, for:

Never had I ever
Heard such terms:
Physical-distancing, flattening the curve...
What the heck!

Never had I ever
Thought self-isolation would be cruel
And unusual punishment,
For no wrong of mine!

Never had I ever
Imagined imprisonment at home
Other than once-a-week outings for essentials,
Though it’s safer staying home!
Never had I ever
Thought I'd be afraid to grocery shop
Or enter another store—even step outdoors,
But the money I’m saving!

Never had I ever
Imagined I'd be yelled at
For walking down an aisle,
What are those floor arrows?

Never had I ever
Imagined ER treatment like a leper
Because of my postal code,
Isn’t that discrimination?

Never had I ever
Thought I'd be forced to don a mask
Other than on Halloween,
But it hides my wrinkles!

Never had I ever
Thought hugs and family gatherings
Would be forbidden,
The technological alternative does not cut it!

Never had I ever...
Thought the world would change as it has.
Never had I imagined a virus would—or could—
Shut down the world.
Oh, 2020, what have you done?
The year isn’t half over and
The news is too grim to watch
And Nova Scotia mourns and mourns...
Covid-19 deaths of too many elderly,
Canada’s worst mass shooting of twenty-three,
Six dead in a military helicopter crash.
On our porches we left boots for Dylan
And lights to guide him home,
A wee bit of hope that soon died.
So many “never-had-I-evers”...
Alas, the world has changed
And not for the better,
But when our “normal” returns
Perhaps people
Will change to better the world.
We can only hope and pray.
But I have my doubts.

Welcome to the Spot Writers. This month’s prompt is “never have/had I ever.” Today’s writing comes to us from Val Muller, author of the Corgi Capers kidlit mystery series. Find out more at www.corgicapers.com.
The dandelion, pictured below, served as inspiration for this poem. 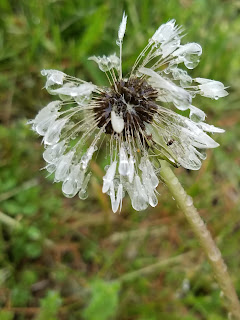 Never had I ever thought
I’d wait for bread in line
Or that a Meatless Monday
Would happen in my time.

Never had I ever thought
I’d stare at empty shelves,
Or panic when I coughed a bit
Or gasped for breath if I yelled.

Never had I ever thought
I’d live to see the day
When the 1918 pandemic
Came back again this way.

Never had I ever thought
The schools would shut their doors,
That I’d wash my hands ‘til raw
After a dangerous visit to a store.

Never had I ever thought
I’d be shuttered in my home,
To work from screen and keyboard
And to communicate—alone.
Never in my busy life
Had I ever banked on this:
That time, my short commodity,
Was now given as a gift.

Never had I ever seen
Dandelions graced by the rain
While tiptoeing through chilly dew:
It was like childhood again,

That timeless sense of wonder,
The lack of any rush,
To watch raindrops melt off flowers
In the early morning’s hush.

Never I, since growing up,
Felt wonder flow so free
As when this time afforded me to sit
While the trees whispered in the breeze,
Or when I watched a honey bee
Floating through the trees.
And while the world slows down a while
In fear of this disease,
And stresses about washing hands
And worrying when we sneeze,
We’re forced to wait—actionless—
While Fates do what they please:
The beauty’s there for those who’ll see,
Who can take the day—and seize!

Mi presento! This is me!

Chiara De Giorgi is a professional dreamer, reader, writer and storyteller, translator and editor.
She was born in Milan, Italy, but has been living in Berlin, Germany, for a while now.